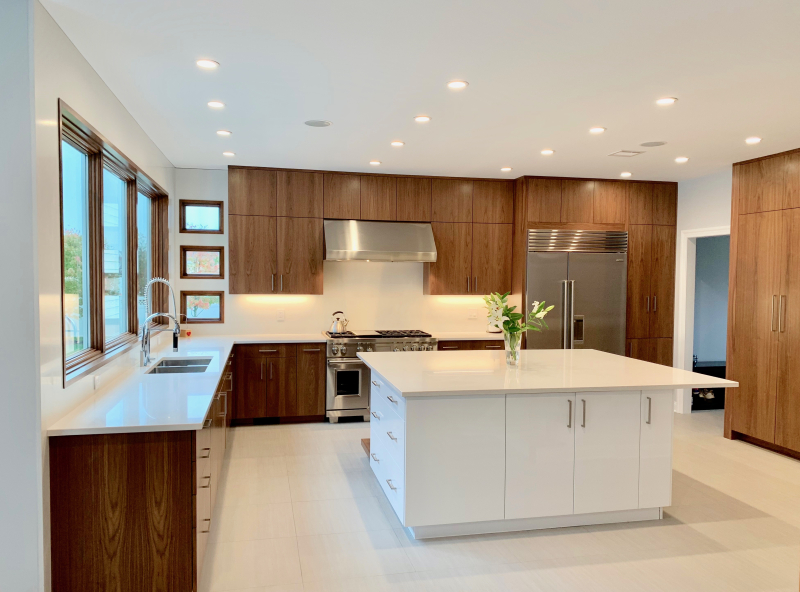 We just completed this stunning kitchen transformation in Freehold, NJ.  It was a substantial project, a complete gut remodel down to the studs and the subfloor.  But the final product is impressive and the space sings now.  The modern look is both warm, with perimeter cabinets in beautifully grained walnut wood, and clean with a massive center island in white acrylic.  The quartz counters are white with a light veining, and the backsplash walls were finished in polished white quartz for ease of cleaning. New LED lighting and light grey tile flooring keeps the space bright and airy.

The biggest transformation architecturally was the back wall of the house. The wall was partially closed in the center, and had an unbalanced window layout.  We blew out the entire back of the house and installed a nearly 12' wide picture window in the space. But the change is absolutely remarkable and connects the kitchen with the outside space no matter where you are in it. 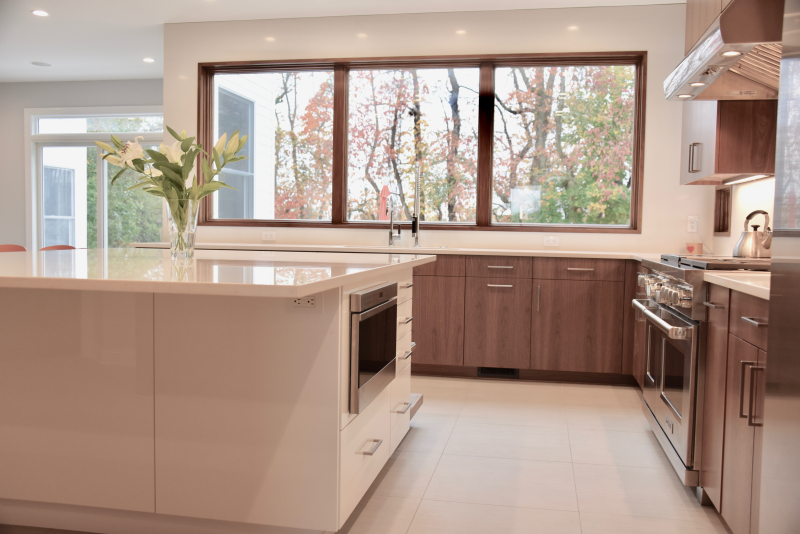 Here is a photo of the back wall before the work for reference. We had to relocate some ducting and of course the electrical panel was located directly below in the basement so there were some home-run feeds that needed to be rewired as well. 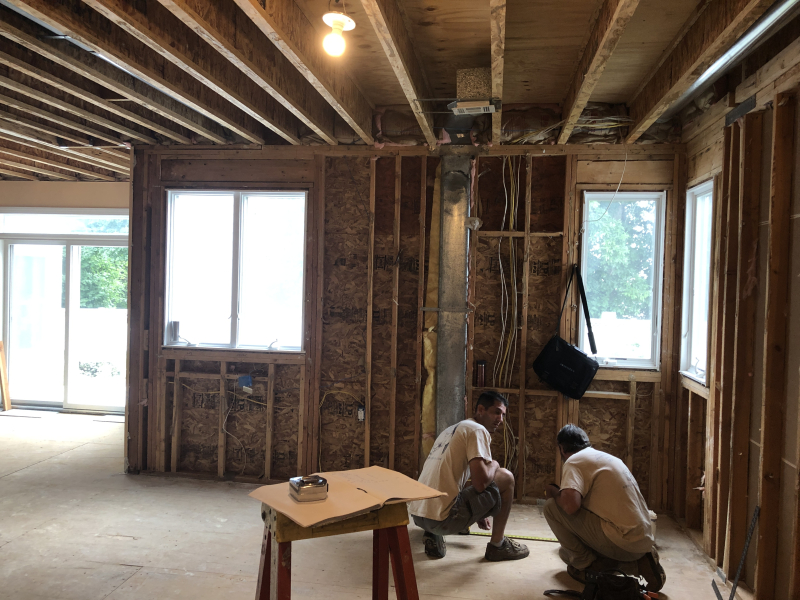 At the back corner, we installed three smaller windows, which were originally intended to have walnut shelves installed between them.  But when we put them up, they closed the space in, so we opted not to use them. So now the rhythm of the three little windows plays off the three unit wide picture window and creates a nice harmony.  This is an important lesson, you need to be able to adapt on projects as they progress and see how things actually look and work in the space.  In this case, omitting something actually made the project better!

Also – note how we installed the white quartz on this entire wall, around the windows and even down the side of the outermost cabinet.  We then made a special low profile trim to finish the windows, and stained them to match the cabinetry, for a very dramatic effect. 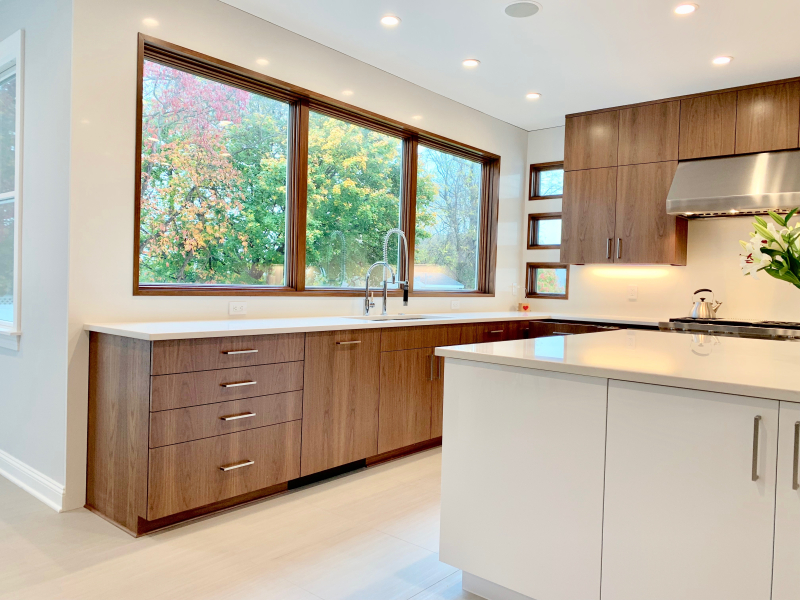 The other significant change was at the other side of the room, where there was a walk-in pantry that projected four feet into the room.  We eliminated that so that we could make the island as big as possible.  In its place, we installed a series of 24" deep tall pantry cabinets, half-way recessed into the wall so they didn't project out into the room too much. Each pantry was fitted with full depth solid maple roll out shelves for maximum storage.  It was a very similar amount of storage but done in a much more beautiful way, so we could carry the wood tones to that back wall, and architecturally enlarge the space. 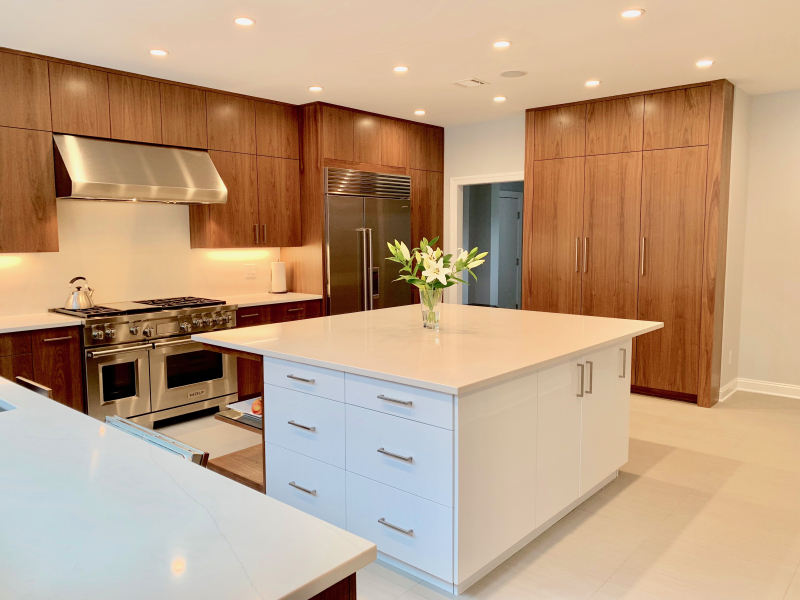 The center island itself is massive, clocking in at 90" x 76".  But what was most impressive, is that we were able to find a white quartz in the correct color, that was available in a large enough size so that we didn't need to have any seams.  With the amount of overhead lighting, and natural light from the window, we were afraid that a seam would really stand out.  So glad we were able to find large enough material, and a special thank you to Statewide Granite and Marble for helping us!

On the corner of the island, we wanted to break up all the white and introduced an open walnut cabinet. It actually helps your eye turn the corner and gives the island some interest.  We were debating it as a spot for a toaster oven or not, and its wired for that, but decide it might be better off as display and the fruit bowl! The island also holds the Wolf microwave drawer, a mixer lift mechanism, and plate organizers in several of the drawers. 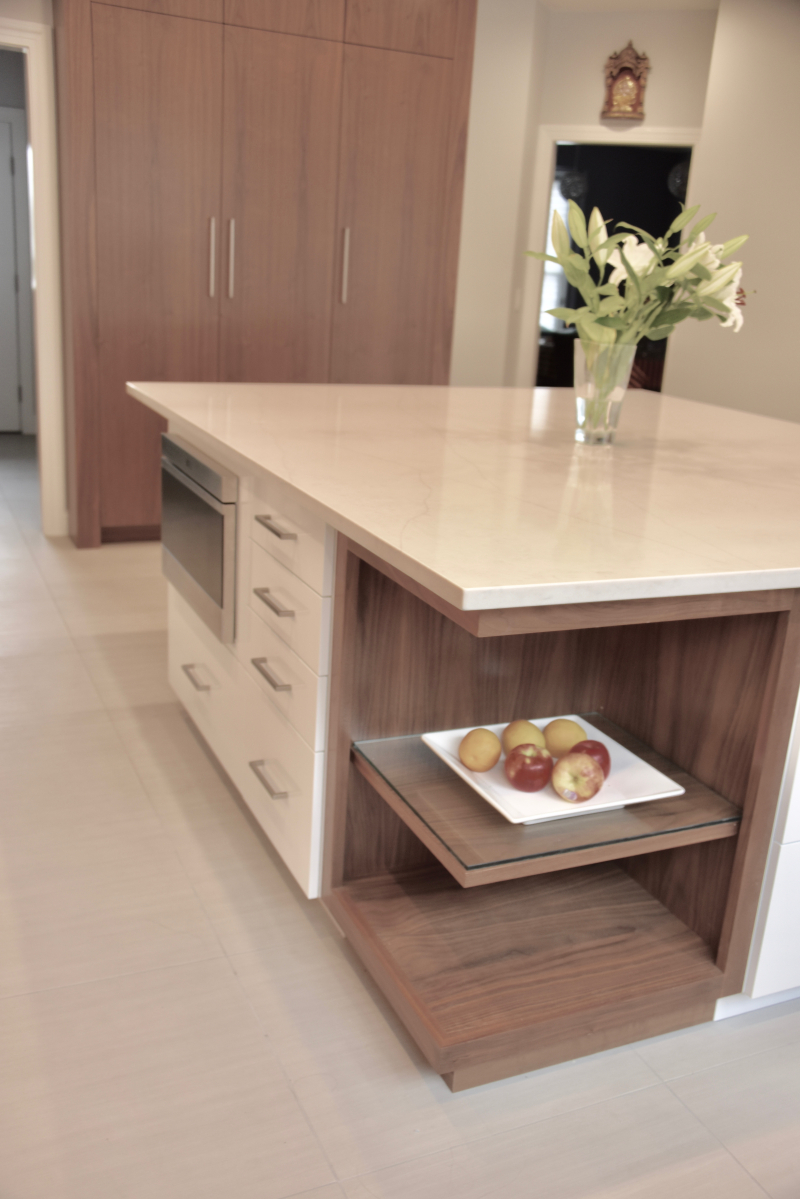 The appliances are the best available, a Wolf dual fuel 48" range with 6 burners and a griddle.  The homeowner said his tea has never been ready quicker since he's started using the 18,000 BTU burners!  There is a Wolf ventilation hood above, which, at 1200 CFM, will take away any smells generated by cooking pretty instantly.  But to cut down on the noise that kind of motor makes, we mounted it remotely on the roof of the garage.  It also had to be wired for "make up air" a new building code requirement that says you must bring fresh air into the house when the hood is on.  This doesn't make a lot of sense in older homes where there are normal air exchanges, but in some of the "airtight" new homes that are getting built with closed cell spray foam insulation, it's probably appropriate.  But the law applies to every exhaust vent over 400 CFM, which is basically anything stronger than microwave-hood, so keep that in mind when planning projects! 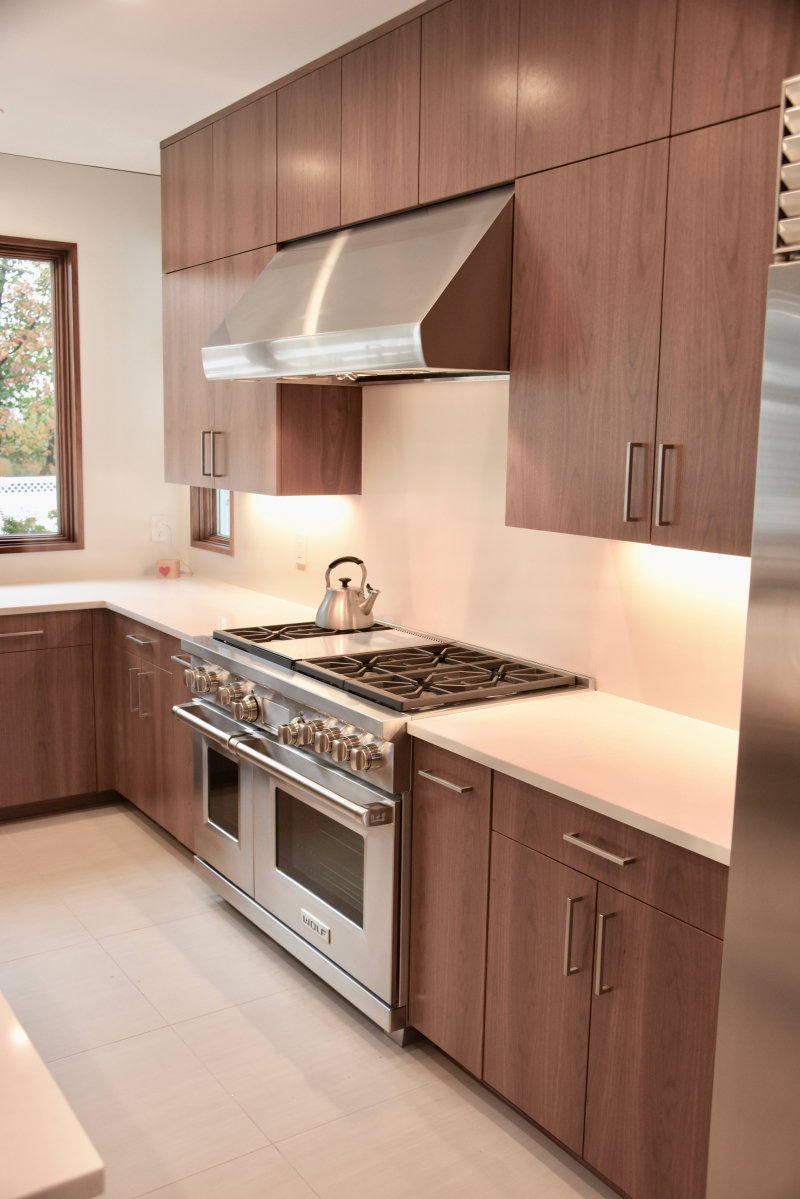 The refrigerator is a classic stainless 48" Sub Zero, and we installed a Sub Zero beverage refrigerator right next to it, which we opted to panel, so as not to detract from the power of the stainless on the refrigerator.  It pops much more this way.  And the panel of the door is of course split to mimic the split door immediately above.  These little details make a huge difference in the final look and feel of the kitchen, especially in modern design. 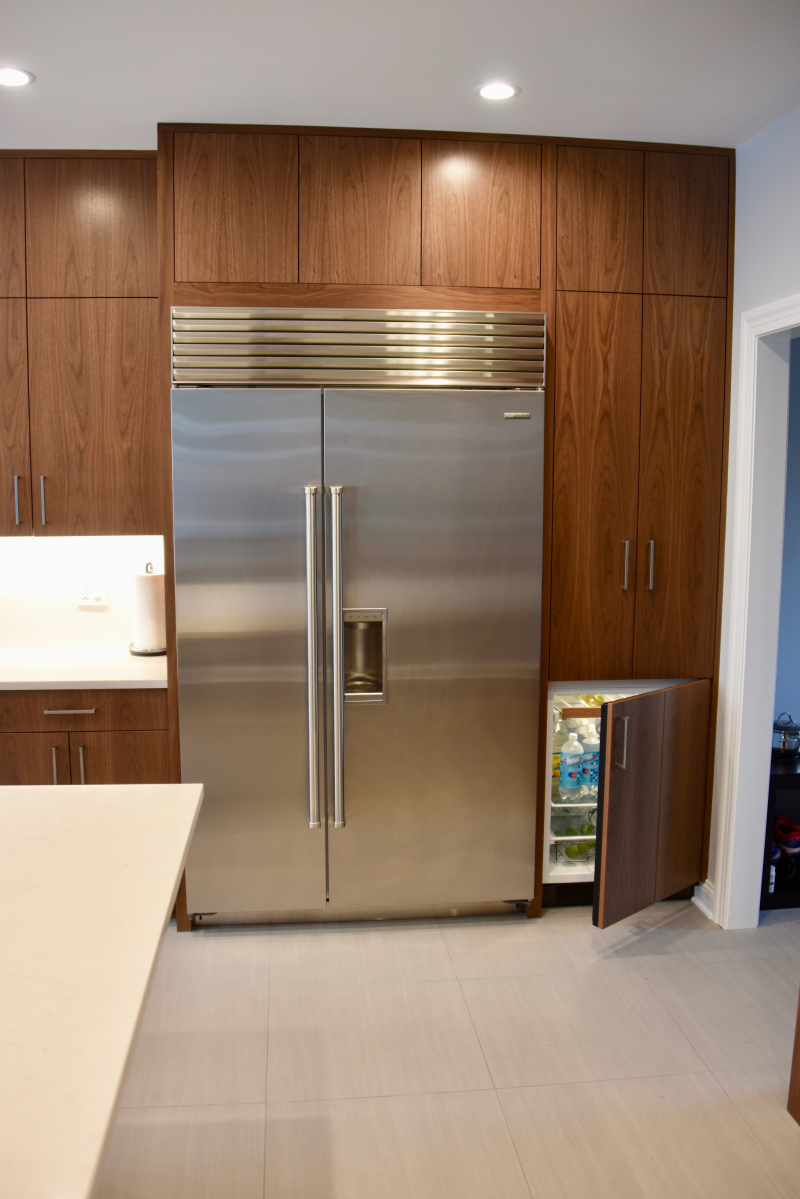 The sink is a double bowl under mount Franke, and a special Dornbracht faucet with a sprayer like one might find in a commercial kitchen.  The disposal button is also by Dornbracht, so all the trims of the fixtures match. 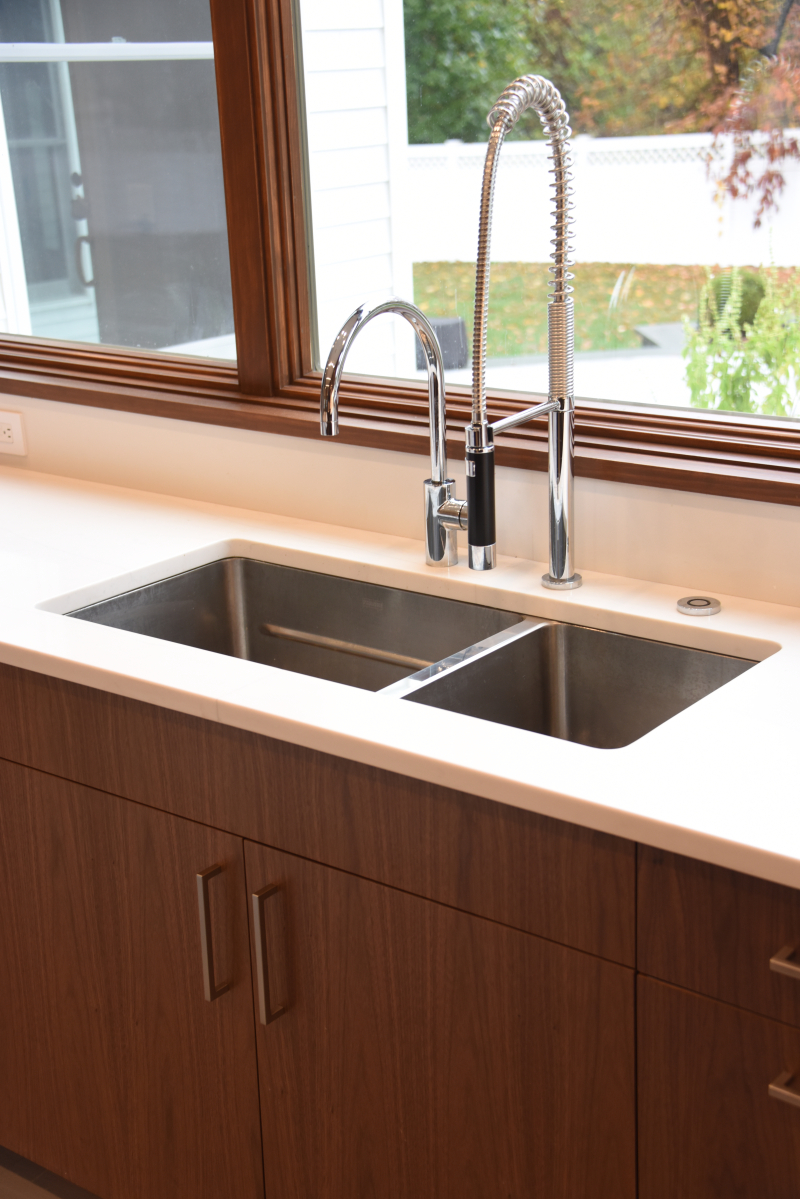 A word on the cabinets themselves. They were manufactured by Quality Custom Cabinetry in Pennsylvania, a company we have had an almost 40 year relationship with.  They are made by real craftsmen to the highest standards, with all plywood box construction, solid maple drawer boxes, soft close hardware, etc.  They set a standard for excellence and are built to last (sadly, many cabinets people buy today are not). We chose a lightly stained warm toned real wood walnut veneer, inspired by some of the great mid-century modern spaces, such as the the old Four Seasons Restaurant in the Seagram Building (now The Grill).  Each veneer flitch is continuous, so the grain continues from top to bottom of each cabinet, whether it is a base, upper, or tall cabinet, and adjacent doors were attempted to grain match and sequence where possible, a stunning detail. The upper doors that are up high were installed with pressure sensitive touch latches so there we didn't need to install the handles on them, which would have been too busy visually. 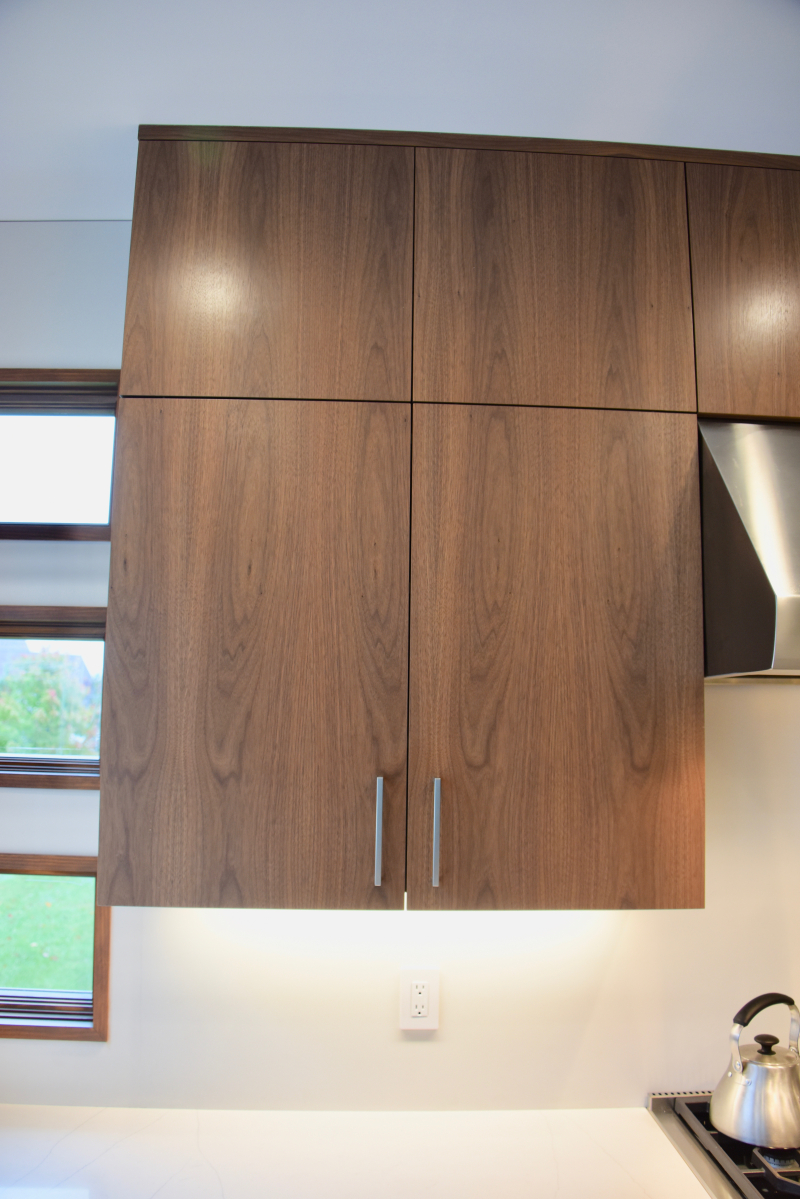 The island is a gloss white acrylic, and has a very high polish that is easy to clean.  There is space at the end of island for stools, and the top is so large than an 18" unsupported cantilever is not a problem at all. 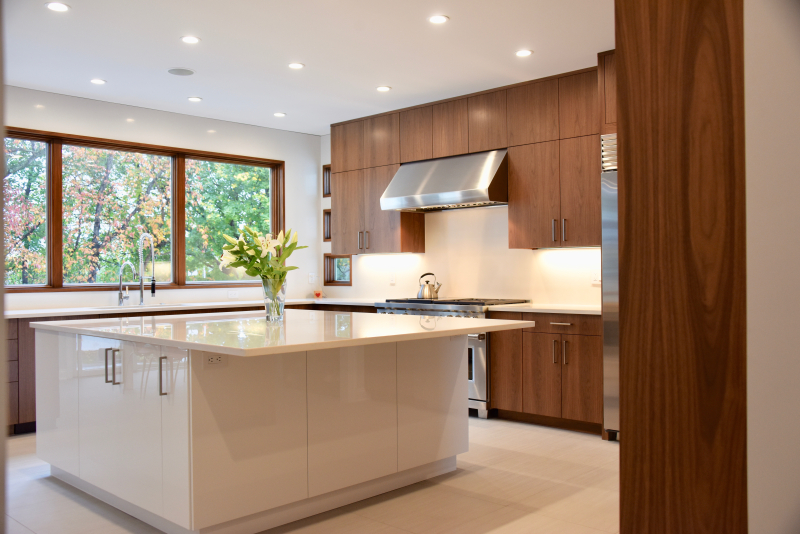 Inside the cabinets, there are some interesting inserts, and everything is in the proper place for maximum efficiency.  The homeowners are talented cooks and use a variety of globally sourced ingredients, so on both sides of the range we installed pullouts for oils and spice racks in the top drawers so everything is visible at once. 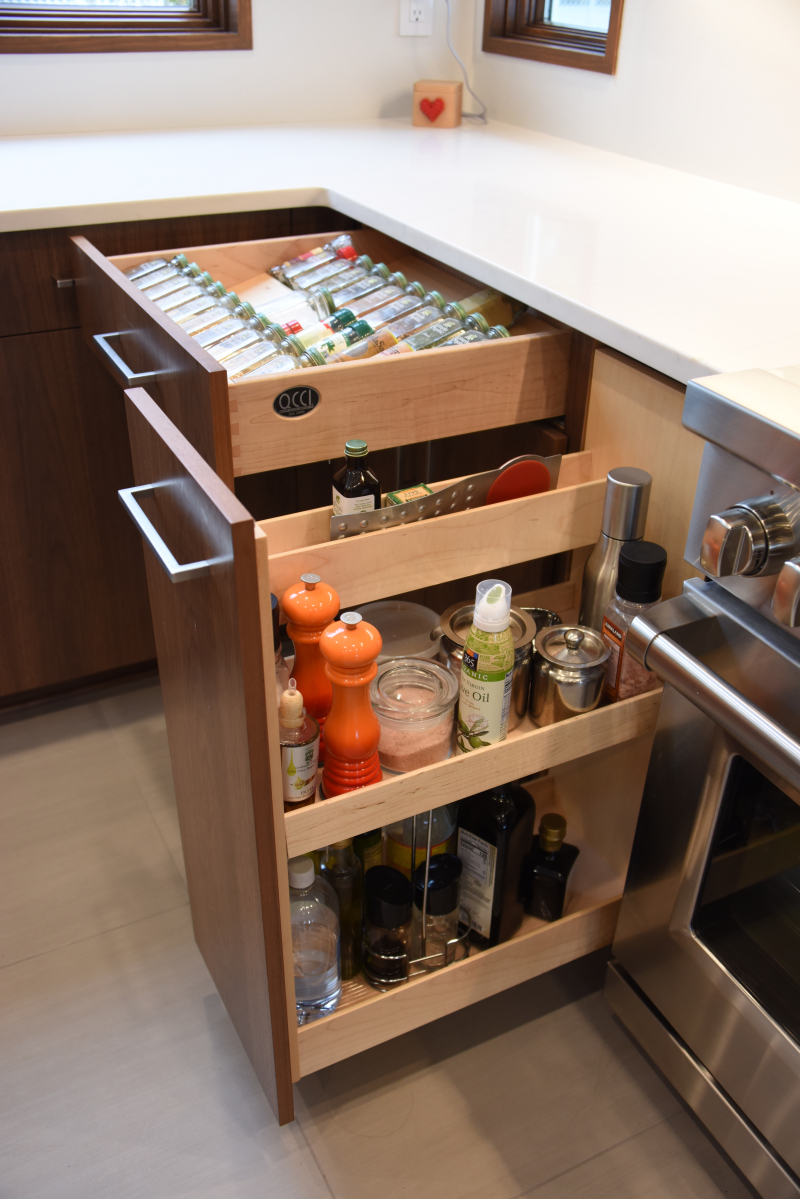 At the sink, the Miele dishwasher is paneled on the left, with the double stainless bin garbage pullout on the right. Also in the picture below you can see a close up of the white quartz that clads the entire wall around the window. 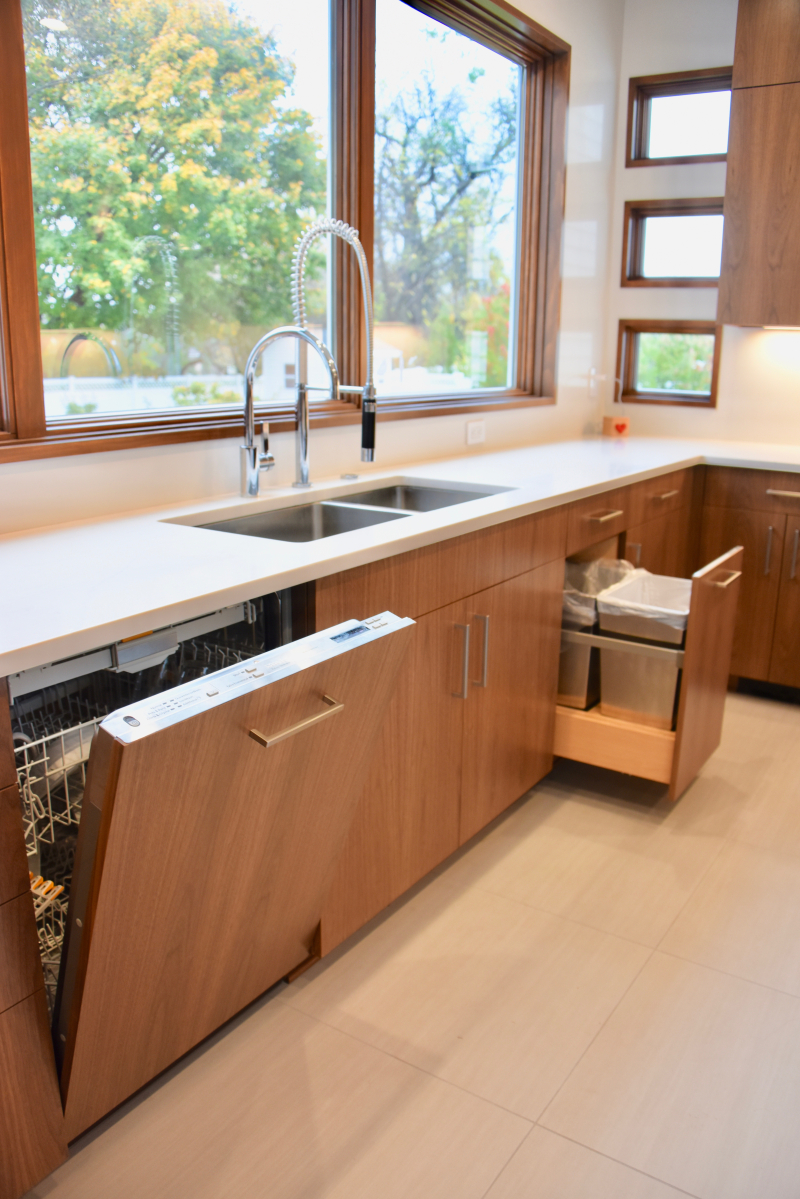 And to take advantage of the corner space, we used a unique mechanism called a magic corner cabinet, which pulls out and rotates out of the way so the back trays can slide forward as well.  Its an amazing piece of engineering, a far cry from lazy-susans of old (though, nothing wrong with those!). 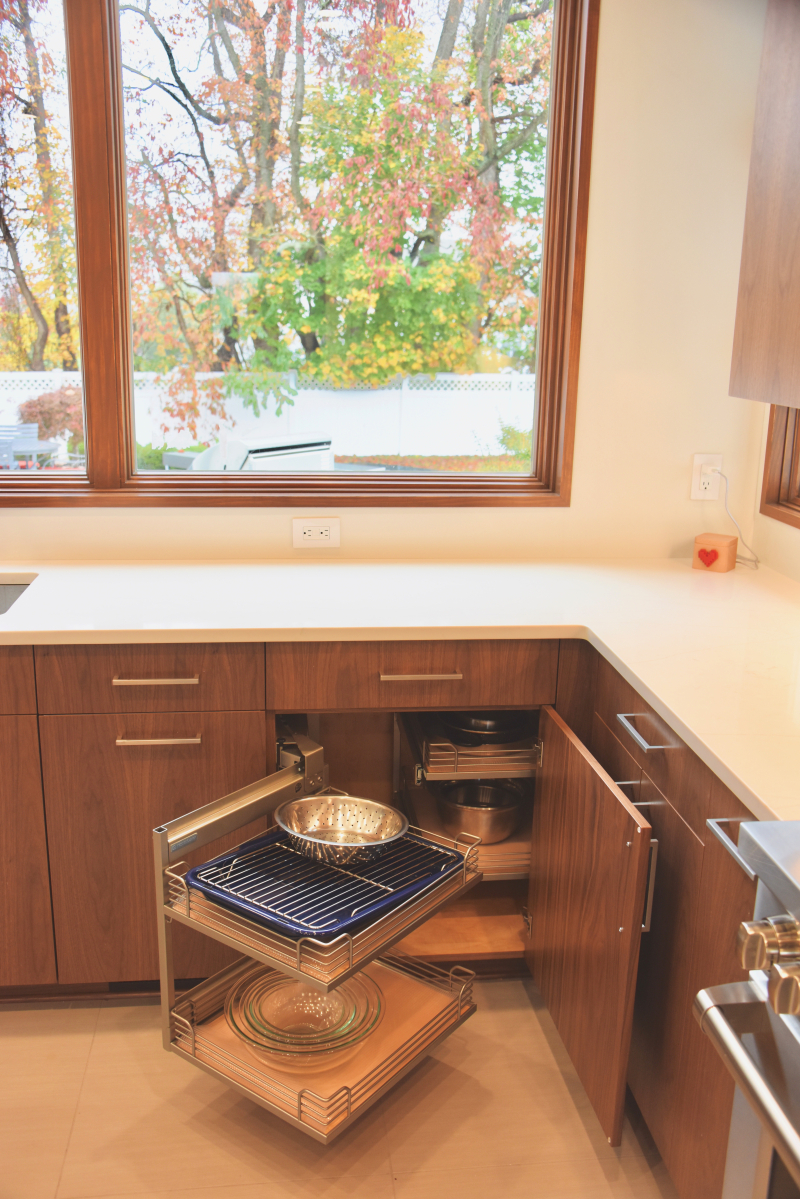 To see how it works, here's a short video:

So, this was a very rewarding project.  The best projects tend to be the best collaborations with your clients, and this was exactly that.  They had the vision of what they wanted, and Aanensen's helped them at each step of the way so that is exactly what they got in the end.  We wish them many happy years in their new kitchen!

A few more pictures of this stunning space: 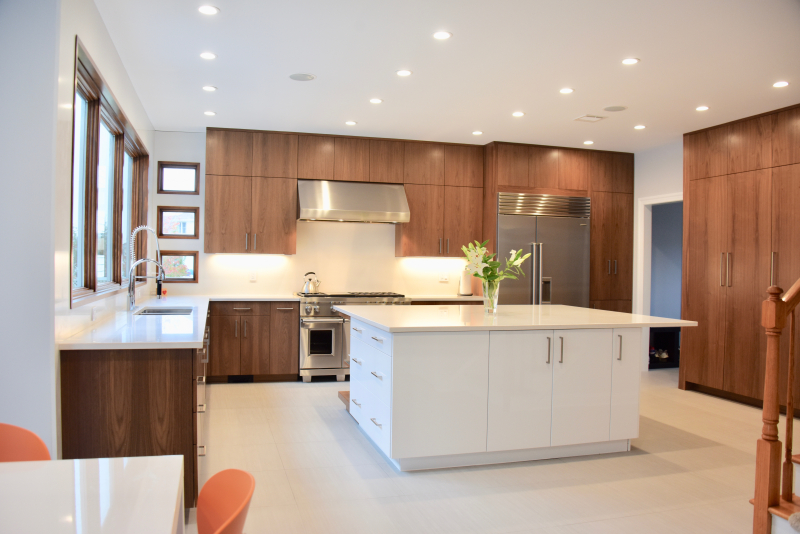 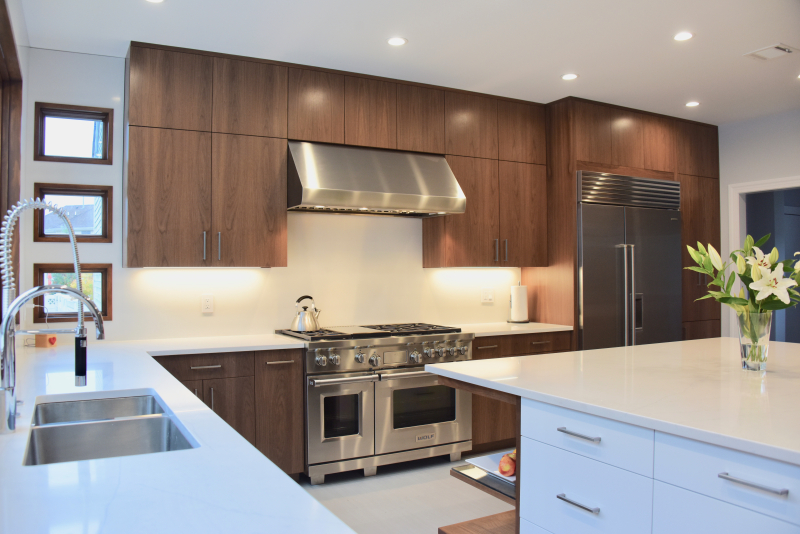 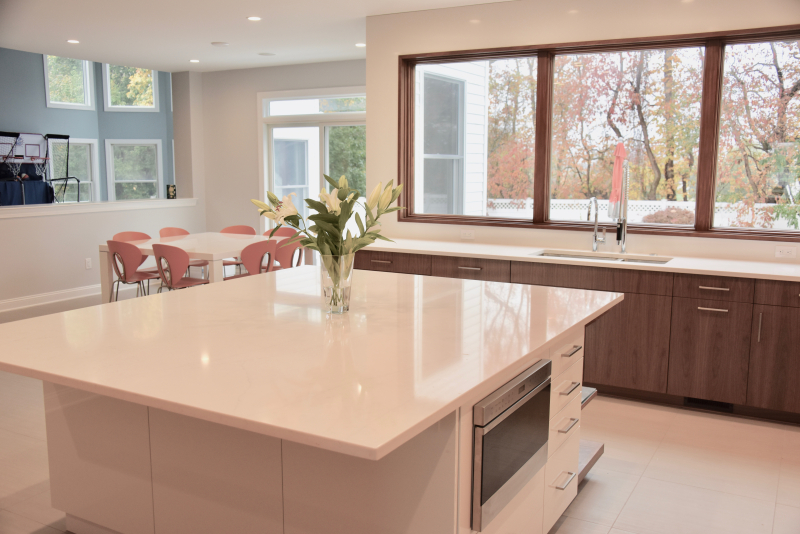 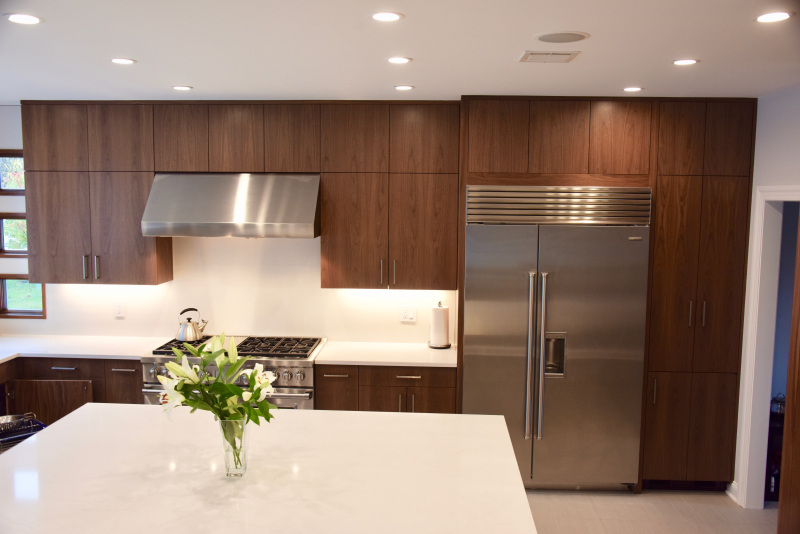 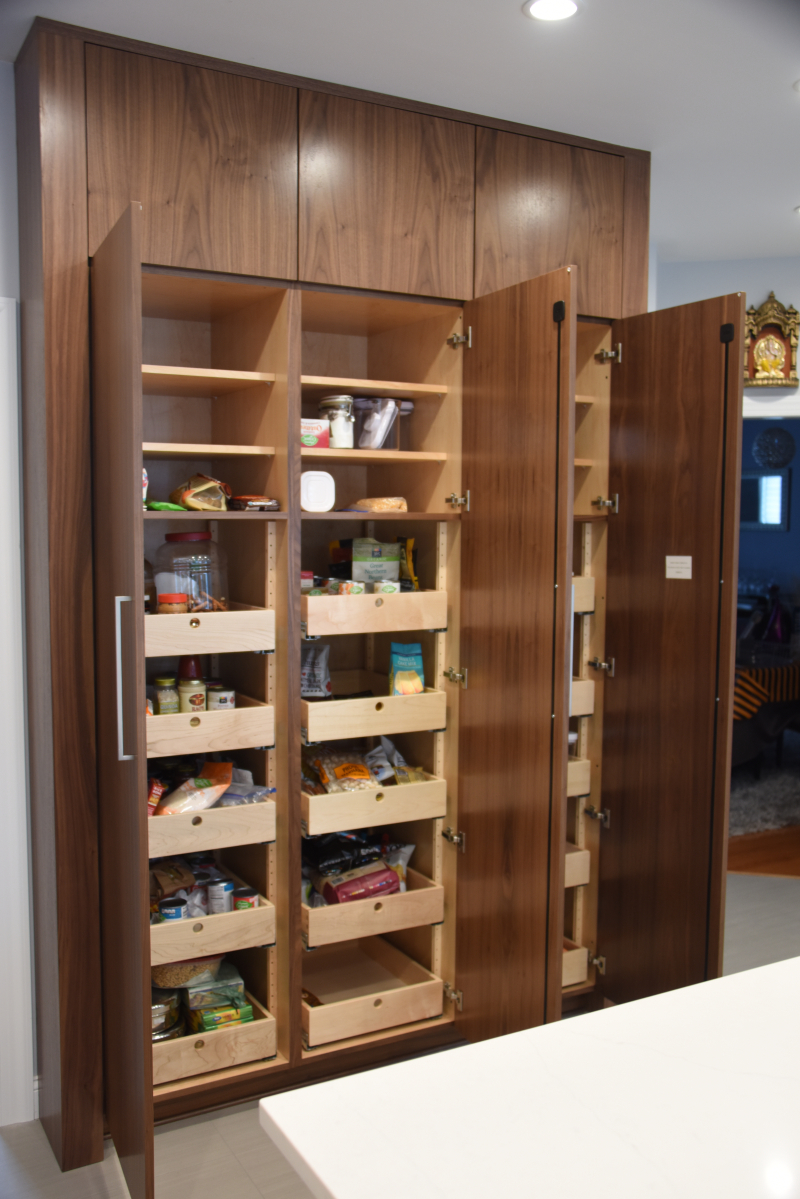