An Ode to the Bunk Bed, Keeping Childhood Magical for Generations

In THE LEGO MOVIE (by far the best animated feature of last year in my opinion), Emmet, the  “ordinary guy as hero” is asked to describe his greatest Lego creation ever. He talks about inviting all his friends over to watch TV, but when they can’t all fit on his couch, he builds a strange double decker couch he describes as a “bunk bed…. but as a couch.  So everyone can watch TV together and be buddies!”

This line is hilariously delivered by Chris Pratt, and it had my daughter and I bent over in laughter.  Of course, Emmet’s couch is widely panned as the worst idea in the history of cognitive thought by his fellow “master builders”.  Yet, if the audience reflects on this, and you  grew up with a bunk bed, or had one at summer camp, or even in a dorm room, you know that Emmet is right!  Bunk beds do kindle and nurture memories and “being buddies” in a way that no mere “A-frame-bed-in-a-corner” could do. 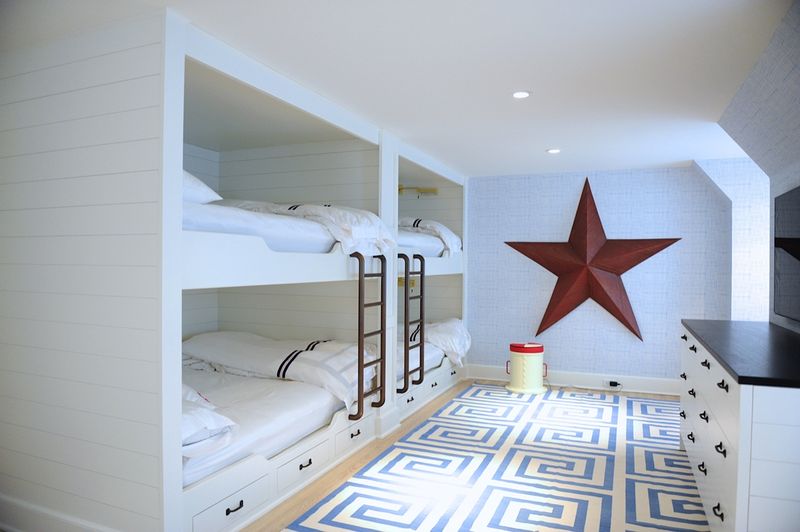 So last year when a client came to us with a concept for built-in bunk beds for children and grandchildren at their beach house at the Jersey Shore, we were excited to develop the idea with them.  We decided on using 4 queen sized mattresses, thinking they were big enough to sleep at least 2 in each, while not being too deep to overwhelm the width of the room, or reach the back of the bed to make it.  So a minimum of 8 could stay here, though if you used Emmet’s logic or ever heard John Denver’s goofy and nostalgic song “Grandma’s Featherbed” there’s no telling how many creatures could slumber here. If you’ve never heard the song, check it out on Spotify.  I think Emmet would’ve loved it.  Come to think of it, I imagine he’d of identified with most of John Denver’s catalog. 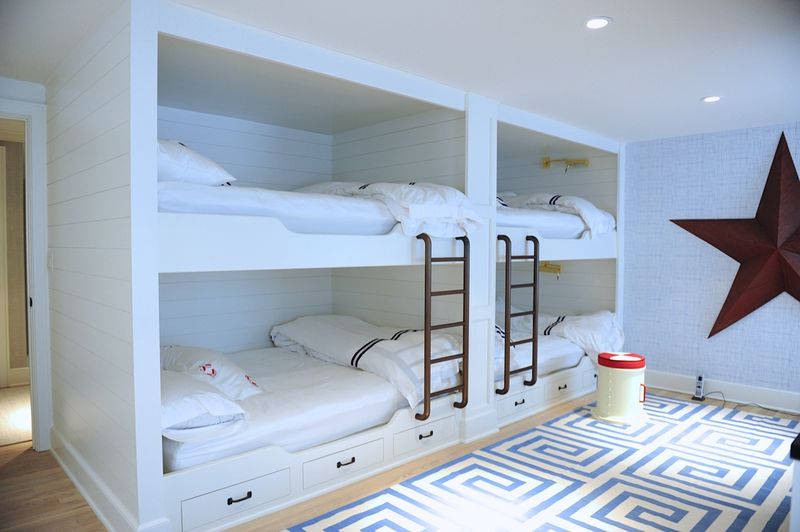 Structurally, we knew that this bed had to be strong since the nature of the basic concept ensured horse play.  So we built the frame out of dimensional lumber with metal hangers and lag bolted everything to the wall, then glued and screwed on plywood cladding.  If there’s ever an earthquake at the Jersey Shore, I’d feel safer sheltering in here.

To develop the nautical theme, we installed horizontal custom tongue and groove boards with a very small space between each, to evoke the lines of an old wooden ship’s hull.  We toyed with the idea of “portholes” between the beds and at the ends, but decided we needed to strike a balance between the design and kids actually sleeping at night.  So we sunk that idea. 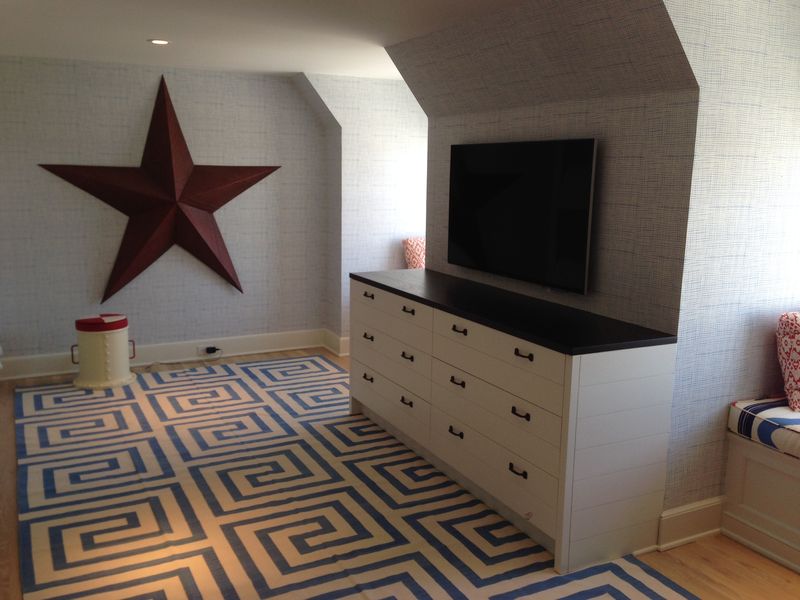 Emmet would be especially happy with the TV on the wall opposite the beds.  Who gets the remote control will be another story.  Below that, we custom made a dresser, clad with the same material as the beds and built it into the wall.  A freestanding piece of furniture would not make sense on this ship! Built in window seats flank the dresser.

There are some storage drawers for blankets the bottom of each bed, and each also has its own reading light, but my personal favorite “piece of resistance” (watch the Lego Movie now if you haven’t to get that reference) are the two sets of railings we had custom made in oil rubbed bronze.   They are gorgeous, and their smooth metal rungs complete the illusion of crawling into your berth after a long day at the beach, still feeling the rocking of the waves as you set sail for your next destination, which in this case might just be the kitchen island for crumb buns from the local bakery for breakfast.  But that’s not a bad place to be headed, and I imagine the children who pass through here in years to come will hold a special place in their hearts for it, just like Emmet did for his double-decker couch. 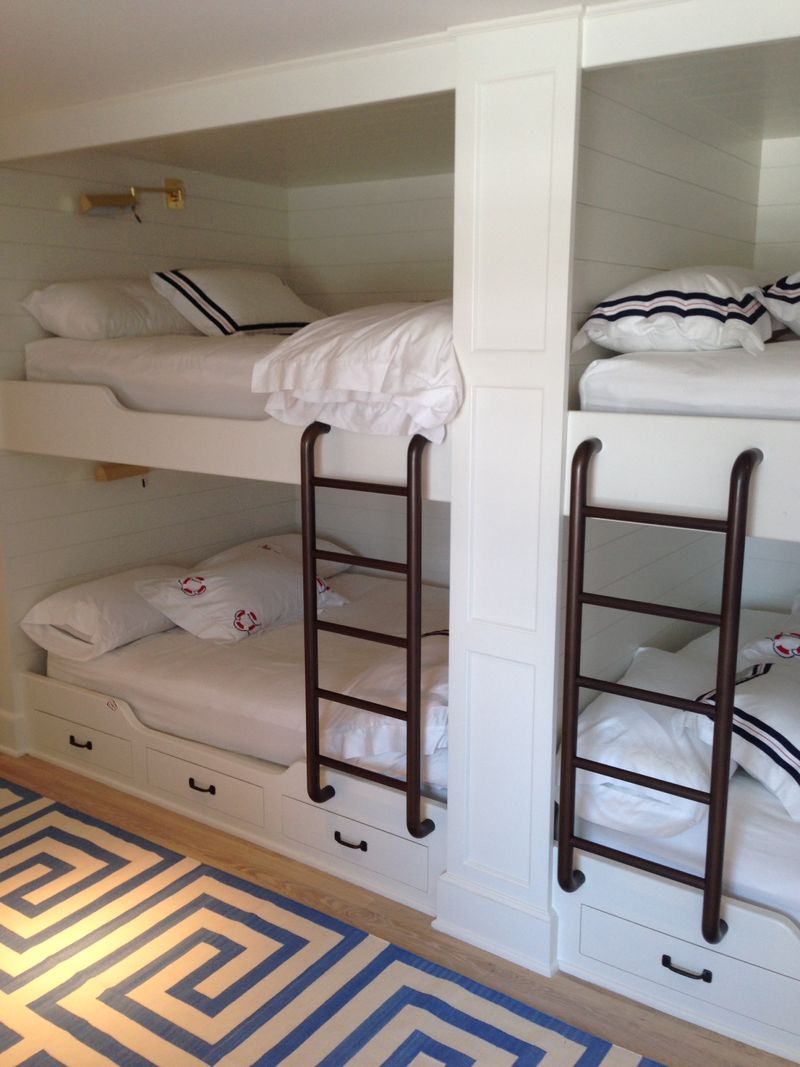