Our Solution to the “TV over the Mantel” Dilemma 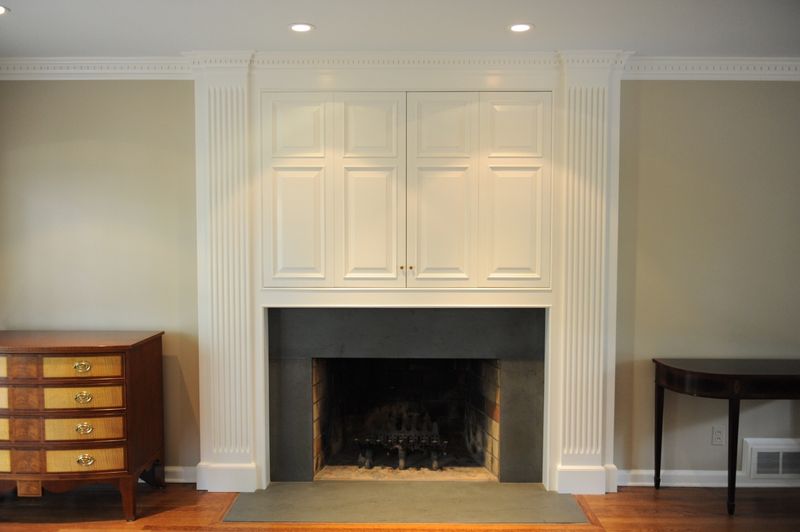 Back in the not too distant past when TV's were as large as an oven, manufacturers used to build elaborate cabinets around them so they would look more like furniture than an appliance.  It was a natural extension of what they had done with radios.  But since the 70's people have been trying more and more to "build in" the TV into wall units or bookcases to conceal their bulk.  This has gotten a lot easier in recent years with the invention of flat panel TV's.

But, it has given rise to another dilemma: how to incorporate a flat panel TV into a formal room?  They look great on their own in family rooms, home theaters, or rooms with a more relaxed setting.  But above the fireplace, as the focal point of a room with antique furniture and nice artwork? Not so much.

Our solution was to remove the existing typical mantel and build a new, ultra thin "cabinet" around it, all the way up to the ceiling, flanked with fluted pilasters to mimic an old-fashinoned paneled chimney breast.  It is more formal than what was there before, but that's a good thing in this case.  The panels in the center of the unit are actually retractable doors that fold back to reveal the 65" TV.  It was a balancing act between the code clearance from the top of the firebox to the bottom of the wood, and the projection of the wood itself. But with TV's being so thin now, we were able to accomplish it all within a 4' space (soundbar included!).  We also kept the TV at the bottom of the opening so it was closer to eye level and less of a neck strain (another issue when people mount TV's over the mantel – they can be too high!).  Equipment was remotely located in a closet.

So, we think it came out great.  When closed it blends with the formal decor, and when open, brings a full blown entertainment system into a room where you wouldn't expect it! 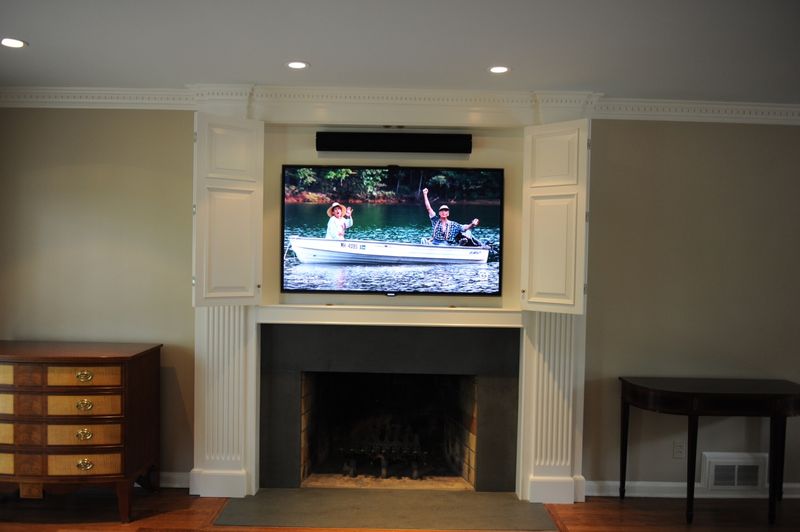